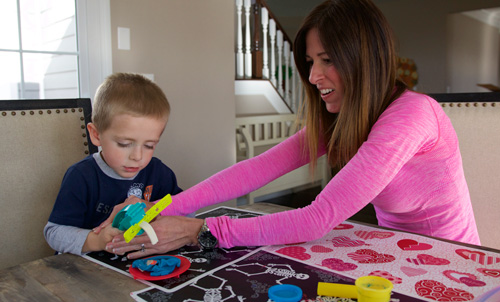 Autism is the fastest growing disability in the United States.

On average, children identified with autism were not diagnosed until after age 4, even though early signs can be recognized from infancy. It is estimated that one in 68 children is identified with Autism Spectrum Disorder (ASD) according to The Centers for Disease Control (CDC).

Autism is a developmental disability that affects a person’s social interaction and nonverbal and verbal communication. At this time, there is no known single cause of ASD. Research shows that early diagnosis combined with intensive intervention improve the lives of people on the autism spectrum throughout their lifetime.

The diagnosis of ASD is given by professionals using standardized assessments beginning in childhood. Health professionals observe a child and determine a diagnosis based on their behavior and development. At this time, there is no medical test for ASD.

The signs of autism typically are present in early childhood. According to Autism Navigator, the symptoms may include:

The average age of autism diagnosis is around four years, even though most cases can be identified by age two, or even as early as 12 months. Some ASD therapies require an official diagnosis, causing a delay during key windows of opportunity for intervention.

PLAY Project interventions can begin before a child is officially diagnosed and as early as when red flags or concerns are noticed. The earliest intervention is critical.

For more information about Autism Spectrum Disorder, click below
What is ASD?